The breed of schnauzer dogs is divided into three sub-breeds: the miniature schnauzer, the medium schnauzer and the giant schnauzer. To help us write this article, we were assisted by our partner Marek Maréchal from Schnauzer des fesses madame.

Like the Wirehaired Pinscher, it belongs to the group 2: Pinscher and Schnauzer – Molossoid and Swiss Mountain, Cattle Dogs and other breeds. 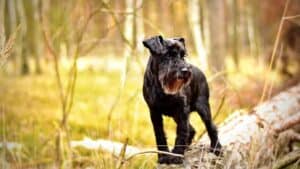 The origins are ancestral and are twinned with those of the dog terrier. They were born to hunt and came down from the dog terrier. It is, however, a ratter dog. The selection of the breed then turned to the shaping of a defensive and guard dog. The original breed was the medium breed, then came the dwarf and giant declinations.

He is originally from the Austrian Tyrol in southern Germany. He usually lived in the stables. The dogs ran alongside the stagecoaches and in the evening hunted rats and other rodents in the stables, hence the name “ratter”.

They even served as guards during the two World Wars to guard the prison camps.

His name of schnauzer comes directly from his face, between his muzzle, his beard and his moustache which gives him a severe look, but it is not so.

The physical characteristics of the Schnauzer: 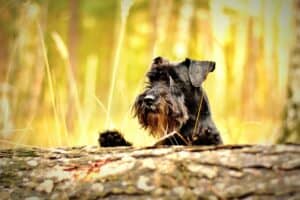 Its ears are hanging and bent forward in a V-shape. His bushy eyebrows are typical of him..

His eyes are dark in colour and lively in expression.

He is a hypoallergenic dog and Marek proved his veracity by explaining to us that he had had allergic clients for several years and that none of his schnauzers had aroused any allergies.

The length of the schnauzers is close to their height at the withers which gives them a “square” appearance. 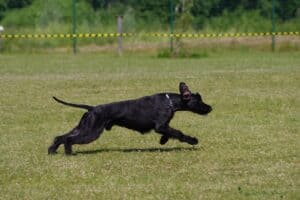 Its weight can go from 4,5 to 35 kg depending of course on the subdivision of the breed. The smallest dog is obviously the Dwarf Schnauzer and the largest the Giant Schnauzer.

His fur is harsh and fairly short.

There are 3 main colour variants. The first is black or silver black, the second is two-tone (pepper and salt) and the last is pure white.

His character and behaviour : 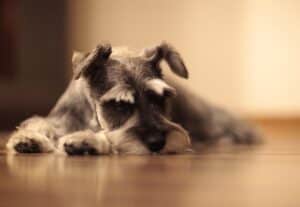 According to Marek, who has had experience with several breeds of dogs, it is a perfect dog thanks to his balance and versatility. Its character traits make up all its charm.

His affection and calmness are present, but are not absolute values, it all depends on the individual and his mood. It is very protective and is an outstanding hunting companion. He barks little and never for nothing. Dwarf schnauzers tend to bark more than mediums and giants.

As Marek told us, this is a very balanced and versatile dog. Because of this he lives well with the children, he adores them and because of this he protects and watches over them. The schnauzer is a dog that is sociable with other animals if he is used to it. As proof, Marek also breeds cats! But he nevertheless remains a ratter, who cannot deny his hunting genes. If a hen flaps its wings, it will obviously excite it.

However, beware, the schnauzer does not like foreigners at all. He is very distrustful, but is of extraordinary devotion and fidelity.

How to educate a Schnauzer?

The schnauzer can be easy to educate, but not without pain either. Indeed it is a relatively unobedient and extremely intelligent dog. Armed with its steel character,

you will need to be firm for a successful education. You must fix the limits as quickly as possible and do not let him exceed them. On the other hand, firm does not mean brutal, in which case it will be impossible for you to pull anything out of your schnauzer because it is almost… stubborn. In the words of our 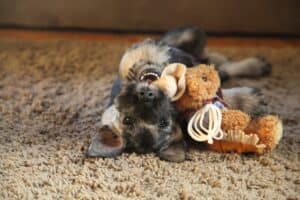 partner: “he will submit to love but not to harshness”. Developing a complicity with him is the best way to get a successful education out of it.

As Marek does, socialisation from an early age allows you to avoid behavioural problems in the long term. And it also avoids having a fearful dog.

The ideal living conditions for a Schnauzer?

It is quite versatile, it can be adapted to more or less all environments requiring some daily adjustments. Although he is very calm indoors, which makes him an ideal companion, according to Marek given the way he spends himself when he is taken out, it is undeniable that he needs to be taken out often for long walks.

He can even acclimatise to life in a flat without any problems.

Although they will prefer large green areas to stretch their legs at will. As you can imagine, the giant schnauzer is not the best choice for living in a flat. In a flat it will require more attention and time for outings than if you had a large garden.

This dog is very well suited as a first dog, by its calm and loyalty.

He prefers a sporty and adventurous master, but will be satisfied with you if you are not, as he is very attached to his master and adapts relatively well to him.

Older people are advised to turn more to a dwarf schnauzer as it will be calmer and easier to live with. 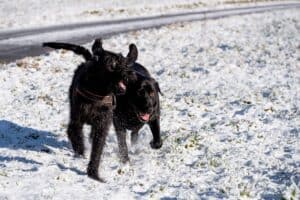 Hardiness and resistance are part of its nature. He is nevertheless very inclined to gain weight, so watch his figure. The schnauzer can even live outdoors as the weather conditions have little influence on it. 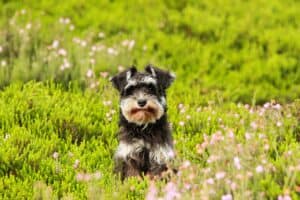 As far as health problems are concerned, certain pathologies should be kept in mind; eye diseases, urinary illnesses and hypothyroidism.

Care and hygiene of the Schnauzer

It is easy to care for, but ideally requires daily brushing, especially for dwarves, although it sheds very little due to its hard bristles. It must nevertheless be “depilated” to remove its regular moulting. It is also possible to shear him, but he will then lose his qualities as an “all-weather” dog by adopting soft hair. One grooming per season is essential according to our partner. And if you want to keep a dog with a “show” appearance, you will have to do a trilling at least every 10 weeks.

The schnauzer drools very little and this is great news for you.

When to switch from puppy food to adult food?

As Amaury Vienne puts it in the article “How to feed your dog well“, the switch to the

Kibble for adult dogs should be made in the last third of the dog’s growth. In the case of the Schnauzer, he must change his diet between 6 and 8 months.

We use cookies on our website to give you the most relevant experience by remembering your preferences and repeat visits. By clicking “Accept All”, you consent to the use of ALL the cookies. However, you may visit "Cookie Settings" to provide a controlled consent.
Cookie SettingsAccept All
Manage consent

This website uses cookies to improve your experience while you navigate through the website. Out of these, the cookies that are categorized as necessary are stored on your browser as they are essential for the working of basic functionalities of the website. We also use third-party cookies that help us analyze and understand how you use this website. These cookies will be stored in your browser only with your consent. You also have the option to opt-out of these cookies. But opting out of some of these cookies may affect your browsing experience.
Necessary Always Enabled
Necessary cookies are absolutely essential for the website to function properly. This category only includes cookies that ensures basic functionalities and security features of the website. These cookies do not store any personal information.
Non-necessary
Any cookies that may not be particularly necessary for the website to function and is used specifically to collect user personal data via analytics, ads, other embedded contents are termed as non-necessary cookies. It is mandatory to procure user consent prior to running these cookies on your website.
SAVE & ACCEPT